On Wednesday 11 May, the Year 8 students set out to Roonka, near Blanchetown, for their camp. The bus trip was long, but fun, filled with singing and telling jokes and we finally arrived at Roonka facing inclement weather. The group was split into two parts. One was based at the Roonka Campsite and the other went on ‘Expedition’. They had to paddle in canoes and set up their camp by the river. Cooking was on Trangia stoves and this put their culinary skills to the test. All groups managed to cook up a feast and were pleasantly surprised by the quality of their creations. 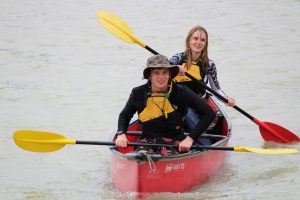 The other group at camp was challenged with team building games and puzzles that required cooperation and constant communication to succeed. ‘Save the Pilot’ was very well done. This involved rescuing an injured person stuck in a tree, making a stretcher and then a shelter to keep the pilot and the whole group warm and dry until help could arrive. Some shelters were of dubious quality, but the teamwork to save the pilot was impressive. The ‘Temple of Doom’ and a low ropes test were other activities that teams had to complete. 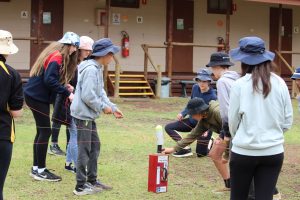 Despite some rain on the first night, most tent pairs managed to stay reasonably dry. Some tents had minor waterproofing issues (leaked) and some students, and Mr Marks, got a little wet. All survived however, and were ready for the next day’s activities. When the expeditioners arrived back, the groups switched roles. 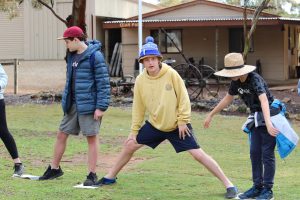 All students enjoyed the water activities that not only included paddling their canoe around some spectacular river scenery and spotting numerous species of birds (thanks to Django for his limitless ornithological knowledge, being able to name every bird we saw) but using the Scout Centre’s water slide and zip line when they returned. Pontoon jumping into the freezing water was a surprisingly well patronised event as well. 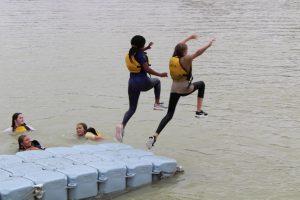 When not on Expedition, the groups were spoiled by the WEOA staff, who cooked excellent meals for them. Bacon and egg rolls for breakfast, sausage hotdogs for lunch and burritos for dinner were devoured with glee.

The highlight for some was sitting around the fire in the evening. Some puzzles and riddles were set by the WEOA staff and the students also got to tell their own scary stories if they wished. The Mafia game and cooking marshmallows (to let them catch fire or not was the main arguing point) or just keeping warm were other popular activities around the fire.

After the second group returned from Expedition on Friday, the camp was broken and 42 tired students and five still energetic staff piled onto the buses for the trip home. The experiences survived and the cooperation displayed were valuable lessons for the students, showing grit and resilience, teamwork and leadership. Almost every Character Strength was on display.

Well done to the students for the strength they showed to complete the challenges and brush off the things that went wrong and for the courtesy they displayed to the staff, both from Investigator and from WEOA. It was a great learning and self-discovery experience.